With graduation canceled, principal drives 800 miles to congratulate each senior in person

With graduation canceled, principal drives 800 miles to congratulate each senior in person

The COVID-19 pandemic has to be a real letdown for the Class of 2020. They’ve worked years to earn their graduation, prom, baccalaureate, and senior banquets all to have it wiped away by the pandemic.

The end of the 2020 school year is also a disappointment for teachers and staff at schools across the country. They also feel a sense of tremendous pride in watching their students graduate.

Virdie Montgomery, the principal of Wylie High School in Texas, didn’t feel like he was doing enough to congratulate the class of 2020, so he decided he would do so in person to all 612 graduating seniors.

After all, the self-described “66-year-old, fat, bald principal” was known for his exuberant school spirit. He once dressed as an Elf on the Shelf and perched himself on top of the school’s marquee to celebrate the holidays. 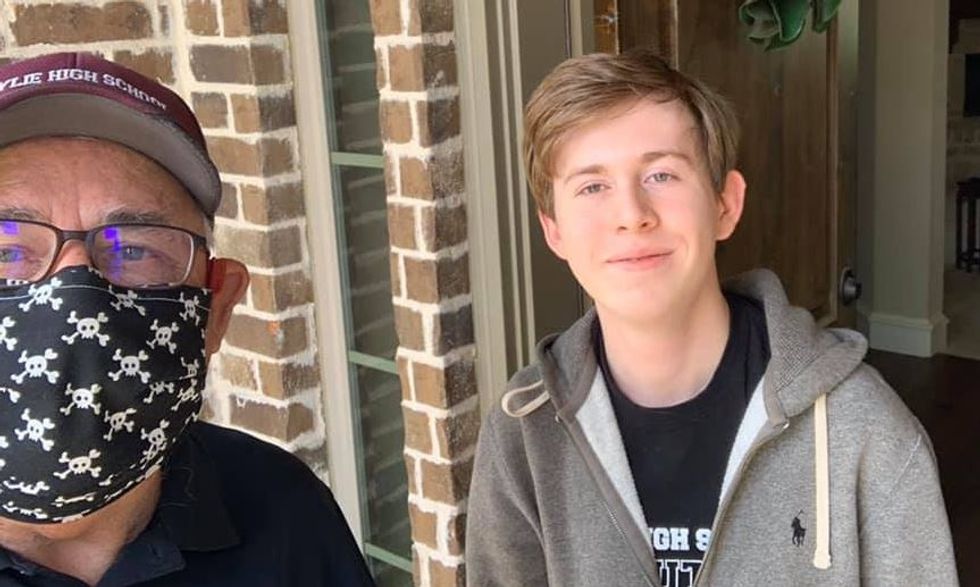 “I get emotional real easy with my kids,” he told WFAA. “And I just didn’t feel like I was doing enough. It just seemed like the right thing to do.”

So the principal and his wife jumped in their car and got to work.

“She told me I was crazy,” Montgomery said. “I tell you what, that first day, at the end of the first day it felt like I had made a mistake. Because it was hard,” he said. He delivered a Snickers candy bar to each student and it came along with a dad joke.

He told them each that they’d look back on these days and “snicker.” “I delivered that joke nearly 600 times. So it’s pretty lame,” he admitted.

“I just love our kids and they have awesome families I have found,” he wrote on Facebook. “If I missed someone it was totally by chance.”

It took 12 days and put over 800 miles on his car’s odometer but Montgomery and his wife were able to reach all 612 seniors at trips to 636 addresses.

“I am now a well-traveled Wylie person and found parts of the town I did not know existed and so many Pirates that live on the other side of town was humorous as well,” he wrote on Facebook.

The principal hopes that someday his school will be able to hold a graduation ceremony for the Class of 2020. Texas’s statewide stay-at-home order ended on Thursday so people are starting to get back to normal.

Large gatherings in the state are still forbidden until further notice.

Montgomery’s trip surely brightened the days of his students on lockdown, but it meant just as much to him. “All I know is that for me it was something I needed to do,” he said, “I can’t adequately describe the reward it is to get to do this and see these kids in their natural environment.”

How to Reinvent Yourself: A Quick Guide

How do you look at this pandemic situation? Well, there are two ways: positive or negative. Negatively, you might look... read more

What does success look like in your life? Is success attaining a certain position, securing a specific income or,... read more

How to know if you have self discipline? When you say you are going to do something and you... read more

On Saturday, Kobe Bryant was officially inducted into the Naismith Memorial Basketball Hall of Fame. His wife, Vanessa Bryant, was... read more

The Real Rosa Parks Story Is Better Than the Fairy Tale

The Real Rosa Parks Story Is Better Than the Fairy Tale The way we talk about her covers up uncomfortable... read more

Cinco de Mayo is a great day to open up a bottle of tequila, whether you're mixing margaritas... read more

The importance of branding in business is undeniable. No matter what industry you are in, there will always be... read more

These Body Positive Influencers Are Normalising Women’s Bodies, and More of This Please

I've spent the better half of my adult life rebuilding my relationship with my body. Learning to nourish it... read more

The Trump administration has said it is considering banning TikTok, claiming that it hoovers up user data and... read more