Multiple high-profile Twitter accounts have been hacked and tens-of-thousands of dollars in Bitcoin have been taken in a daring ‘smash-and-grab’ online scam.

It appears that Twitter accounts of individuals such as Bill Gates, Barack Obama, Elon Musk, Kanye West and firms such as Apple and Uber were hacked. A message was then sent out from these accounts stating that if people sent Bitcoin to a certain Bitcoin wallet they would then receive double the amount back. 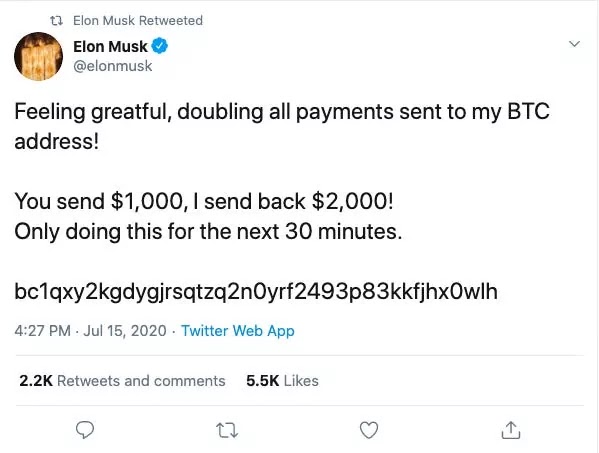 The accounts combined have hundreds of millions of followers, and even though the scam was noticed and the messages were deleted within minutes, that was still enough time to fool a few into parting with their Bitcoin. At least $130,000 has so far been taken from around 320 individuals. 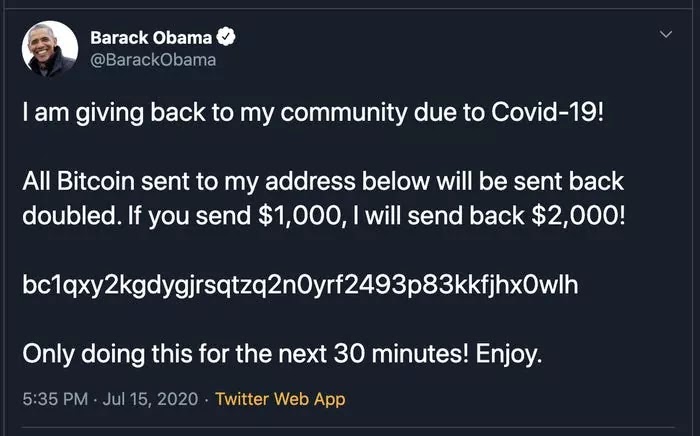 The messages stated that the individuals were only making the offer for the next 30 minutes and that they were motivated by the Covid-19 outbreak and their desire to give something back to their communities. 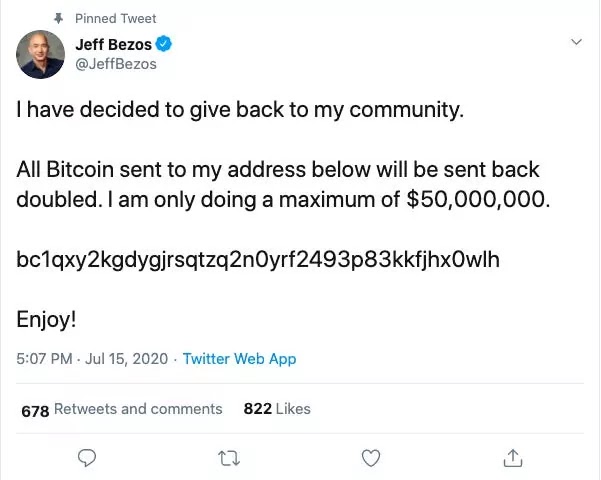 In a shocking twist, when Binance CEO, Changpeng Zhao, one of the individuals targeted, revealed that it was a scam, his warning tweets were deleted, thus showing that the hackers were still in control of his account.

Bitcoin, the decentralised cryptocurrency, is a favourite of scam artists, thieves and criminals as the money is untraceable and cannot be retrieved. Users are aware though of just how unsafe transactions are and so anyone sending Bitcoin has to be absolutely sure of the legitimacy of their transaction. The fact that the official accounts of very high-profile wealthy individuals were used has given this scam an authenticity that others in the past have lacked.

A bunch of high profile cryptocurrency Twitter accounts have been hijacked to tweet bitcoin scams. Likely a 3rd party App compromise rather that Twitter itself. Wallet has received ~$6000. pic.twitter.com/D8MiXrz9ml

We are aware of a security incident impacting accounts on Twitter. We are investigating and taking steps to fix it. We will update everyone shortly.

The sophistication of the attack also begs the question as to whether a state actor could have been in any way involved, though this is thought to be unlikely, and was almost certainly the work of a criminal group of individuals motivated solely by making a fast buck. via Thinking Humanity https://ift.tt/32o5j4f

These Are The Best Trail Running Shoes For Women

Right now, my social distancing runs are one of the few things keeping me sane. And I'm feeling especially... read more

Patrick Mouratoglou Is Serena Williams’s Coach, but Did You Know He Also Coaches These Tennis Standouts?

Behind every great athlete is a great coach teaching them how to improve upon their natural talent and strengthen... read more

How to pitch your small business to the press

You've ever wondered how to pitch your small business to the press? It boosts your brand awareness, lends authority... read more

Self love is the best love. And what is more self love than immersing ourselves in some songs promoting... read more

Flexibility as a Source of Inner Calm

Takeaway: Henry Emmons’ book, The Chemistry of Calm, is a practical and tactical deep dive into what makes us... read more

5 pieces of advice for real estate agents just starting out, from the woman who became top producer at her brokerage less than 4 years after entering the business

Allison Chiaramonte is a real estate agent for Warburg Realty in New York City. She began working in... read more

If Planks Bother Your Wrists, Try This Trainer-Approved Ab Move Instead

Due to extra tender pain in my thumbs and wrists, I've recently had to give a hard pass to... read more

Self Care Tips During Difficult Times (A Therapist’s Advice)

Let's be honest, self-care is a bit like mindfulness - an over-used and almost cringe-worthy, eye-roll of a topic.... read more

Our five key colours, for S/S 22, in collaboration with our sister brand Coloro, take inspiration from the simple... read more